A pelican that dances on cue! A pelican pirouetting in the water, no doubt en pointe! A pelican called Percy, even though she’s a girl. You will want to see this!

So head east out of Albany town to Emu Point looking for a boat called Kalgan Queen. She’s easy to find; more colourful than everything else in the marina, with two flags at her stern – the Australian Red Ensign, and for no real reason other than it looks great, the Murray River flag! Other giveaways are the crowd of pelicans swimming hopefully around her in the pen, and the skipper’s jacket with Captain Jack embroidered on the pocket. 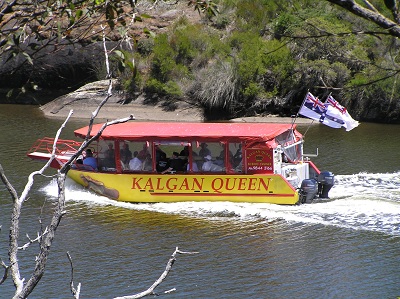 Jack is welcoming, talkative and very knowledgeable. His tour takes Kalgan Queen across Oyster Harbour and up the exquisitely beautiful Kalgan River as far as Nicolas Baudin managed on behalf of his master, Napoleon, all those years ago.

The advertising promises history. There’s a lot about Baudin including a black cockatoo named after him, a bayonet left behind by him, and his unfortunate relationship with fellow Frenchman Louis de Freycinet who tried to wipe him from the history books.

There’s also Jack’s mum’s damper for morning tea which is truly excellent. And birds. Even though a monster string ray can be seen through Kalgan Queen’s glass bottom, birds are the stars of the 4-hour show.

For instance, an osprey, quick and breathtaking as it torpedoes straight to Jack and snatches a fish from his hands. But in the end ospreys must yield to pelicans.

Especially Percy. She is what you might call a “rescue pelican”. Captain Jack was 12 years old when he found the young bird strangling in lines. Jack named her Percy because he assumed she was a he, and at that size no one could tell anyway. The pelican was taken home and lived in the family bath where Jack would hand feed her, making lazy circles in the sky, with a fish! To match these circles Percy made her own in the bath water, and that was the beginning of a dance routine that quite frankly is almost unbelievable. 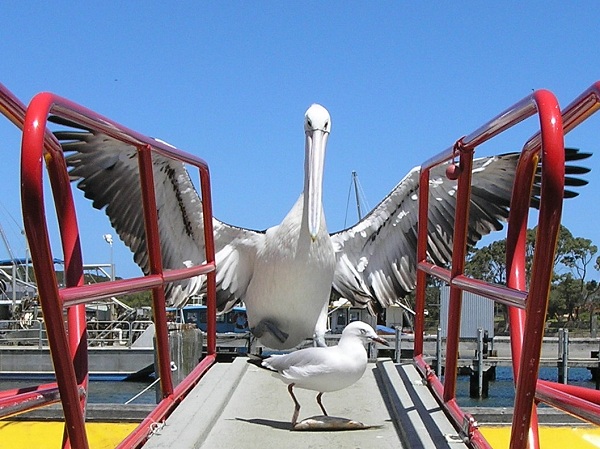 Slowly powering across Oyster Harbour Captain Jack says to us, “You want to see a pelican dance?”

Of course. So, fish in hand he leans over the gunwale and calls to Percy, who has been shadowing us, knowingly, ever since we left the marina, “Dance Percy, dance.”

And shiver-me-timbers, or whatever one says at such a moment at sea, the bird spins neat circles in the water. She’s dancing, keeping up with the boat and soon enjoying yet another fish.

The Captain tells us Percy has a daughter called Pav who will also dance for fish – behaviour learned from her mother, not Jack.

We left Captain Jack with a lot to think about and laugh about. But I think the main take away from his Kalgan Queen cruise – apart from the natural beauty and the nuggets of history – is the Captain himself, his obvious love of his environment and his birds, especially his misnamed pelican called Percy.