Regional plant surveying by volunteers with the Wildflower Society of Western Australia is continuing to make an important contribution to mapping the biodiversity and distribution of WA’s flora and vegetation.

Since 1988, the Society’s volunteer Plant Survey Program, which is a registered volunteer project with the Department of Biodiversity, Conservation and Attractions (DBCA), has conducted flora and vegetation surveys throughout the south-west of WA.  Plant identification sessions for each survey are carried out every Wednesday at the W.A. Herbarium.

Dedicated and long-serving plant survey participant Judith Harvey says this very successful citizen science project, with a register of just over 200 trained volunteers, enhances the skill set of many plant enthusiasts. Training in plant identification and bushland plant survey and plant identification methods has been delivered to hundreds of individuals both within the program and to others including local government field staff and consultants. 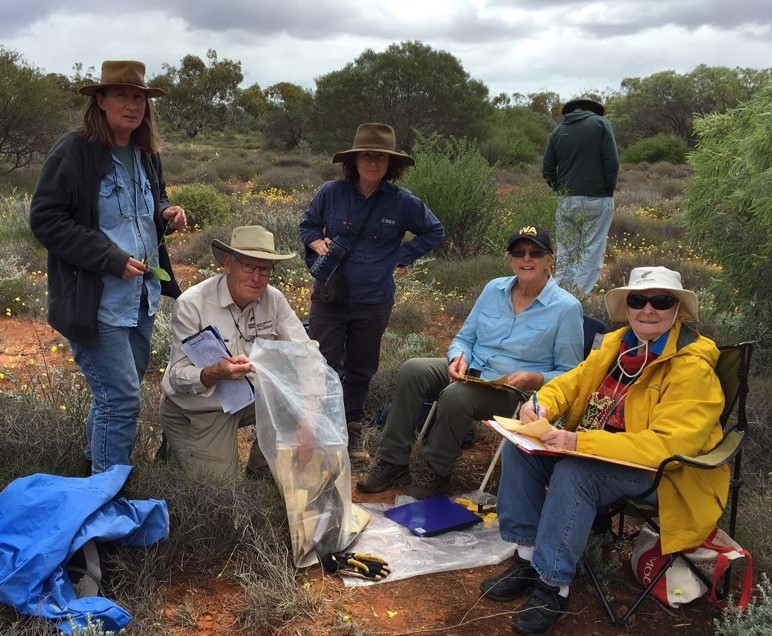 Volunteers involved in flora surveying on the Hamelin Bay Reserve

A sound and consistent scientific basis of the survey work is ensured via reference to published scientific and technical guides.

Judith, an environmental scientist and Plant Survey Volunteer Coordinator, explains that the surveys increase the base knowledge of WA’s unique and diverse flora, with this knowledge then made available for the public and assessments of conservation values.

The program also fosters a detailed understanding of plant and habitat biodiversity in the community. This is important for the recognition and continuing protection and management of Western Australia’s national parks, nature reserves and other conservation lands.

Wheatbelt woodland baseline surveys are planned for Trayning, York, Wickepin, Hyden, and Newdegate with Wheatbelt Natural Resource Management and a busy bee in the Kambalda Herbarium has been scheduled for late September.

The program was initiated by Bronwen Keighery OAM and Greg Keighery OAM who were both awarded Australia Day honours this year for their service to conservation and the environment. Trained as a botanist, zoologist and teacher, Bronwen has written widely on the state’s wildflowers including hundreds of technical reports, as well as books for children and adults.   Greg is a botanist, who has had a long and accomplished career as a senior principal research scientist at the Department of Biodiversity, Conservation and Attractions.