Painted across a vast surface of Collie’s Wellington Dam, the Guido van Helten mural was inspired by local stories and photographs. Photo credit: Department of Biodiversity, Conservation and Attractions 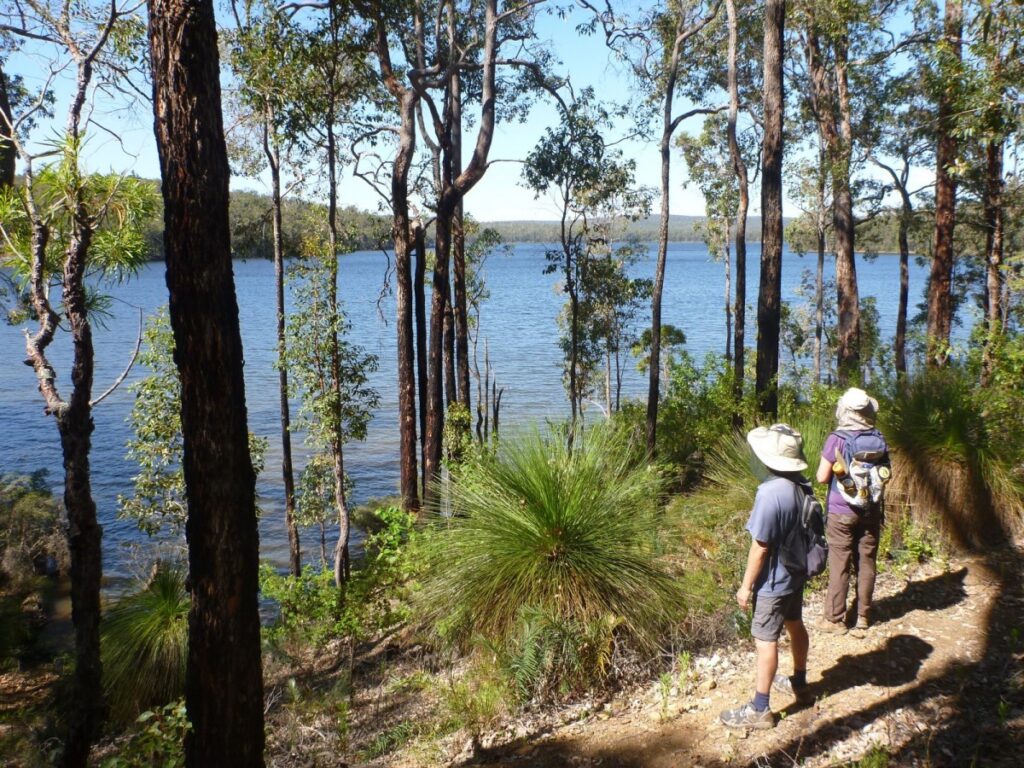 Of course, I had some idea of what was waiting at the bottom of that hill in the Wellington National Park. How could I not since it was one of the biggest televisual, news events of recent years? Those four months when a modern-day abseiling Michelangelo, painted an area much, much bigger than the Sistine.

This is the back story.

In 2021 the West Australian government awards a commission to Australian artist, Guido van Helten. Guido will paint a mural called Reflections on the wall of Wellington Dam on the Collie River.

His canvas is 8000 square metres – the biggest dam mural in the world, they say. They also say that Guido was influenced by traditional graffiti movements. This led to his early introduction to aerosol, they say. I find this interesting. Even potentially anarchic.

I also find the last couple of hundred metres down the hill to be the perfect tease for Guido van Helten’s finished work.

Through the jarrah trunks there are flashes of our destination – maybe an eye, or a brown limb or some white blond hair – until, at the carpark, there is a revelation.

It’s hard to describe first reactions at seeing Reflections towering above and stretching left and right.

What I see is a gentle homage to all the peoples who lived, worked, played and died in Collie town, the mines, the forests, and at Roelands, the Aboriginal mission farm that closed in 1975.

Naturally, there was no shortage of people wanting to be immortalised in paint. But the artist took his time, talking to individuals and organisations, and sifting through photographs to select those who would best represent Collie’s story.

The resulting gallery is a timeline – from the old Aboriginal couple painted from a photograph taken in the 1890s, to the boy with the fish. He’s now in his twenties.

And then there’s the colour palette van Helten used. Greys and greens and blues and browns. The colours of granite, earth, gum leaves, and the pale blue of a summer sky. The almost faded colours of the Australian bush.

In spite of its size Reflections does not shout “Look at me!”

Reflections belongs on the river, on the dam and on the tourist trail

Reflections a gentle message about humanity, wrapped in a thing of beauty.