Family connections to country, resilience and reconciliation for the traditional owners of Danggu Geike Gorge were themes of an event held by the Department of Biodiversity, Conservation and Attractions for NAIDOC week. 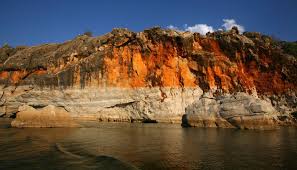 Early interactions between European settlers and the aboriginal people in this part of the Kimberley resulted in many of the Danggu and Rarrawali Muwayi’s of the Bunuba people being separated from their families and ancestral lands.

The DBCA event was also an opportunity to share stories of family links and experiences and to recall the very successful reunion held with the support of the Parks and Wildlife Service (DBCA) at Danggu Geike Gorge in 2018.

The spectacular Danggu Geikie Gorge National Park is the most easily accessible national park in the Kimberley. It is 20 km from Fitzroy Crossing and is serviced by a sealed road.

The gorge has been carved by the Fitzroy River to a depth of 30 metres into the remains of an ancient limestone reef formed in the Devonian period.

There is a 3km walking trail along the western base of the gorge walls. The eastern side of the gorge is a nature preserve and closed to visitors. One of the best ways to enjoy the gorge is to take a boat tour.

The water of the gorge is rich with life including barramundi, sawfish and freshwater crocodiles.

The level of the Fitzroy River in the wet season (November to April) can rise quickly by up to 16.5 metres. As a result, the park is only open in the dry season (usually November to April).

Image: Danggu Geikie Gorge tour boat Ms Casey Ross is named after an elder of the Danggu people. The vessel artwork features hand-painted freshwater crocodiles, sawfish, red-tailed black cockatoos and brolgas which were designed in consultation with the Bunuba people.