It’s a classic line – You should have been here yesterday. Or last week. Or last month.

But we’re not. We’re in Broome, today, and going touring.

Over the years I’ve seen luggers pull up against the old jetty in Chinatown, and the shells opened and sorted. But I’ve never actually been pearling.  Which is why we’re on a bus with a bunch of other tourists, heading for the Willie Creek Pearl Farm. This will be pearling in comfort. Pearling lite.

Willie Creek is due north of Broome town and the drive is through pindan country – red soil, flat, with scrubby trees; the sort of landscape that makes you wonder where you are going, and why?

Cross a flood plain, go round a couple of bends and Willie Creek homestead comes into view, splendidly isolated. It looks like a film set! But closer inspection shows it to be a well-run tourist operation – the spin-off from an equally well-run business, which is “Pearls for Sale.” 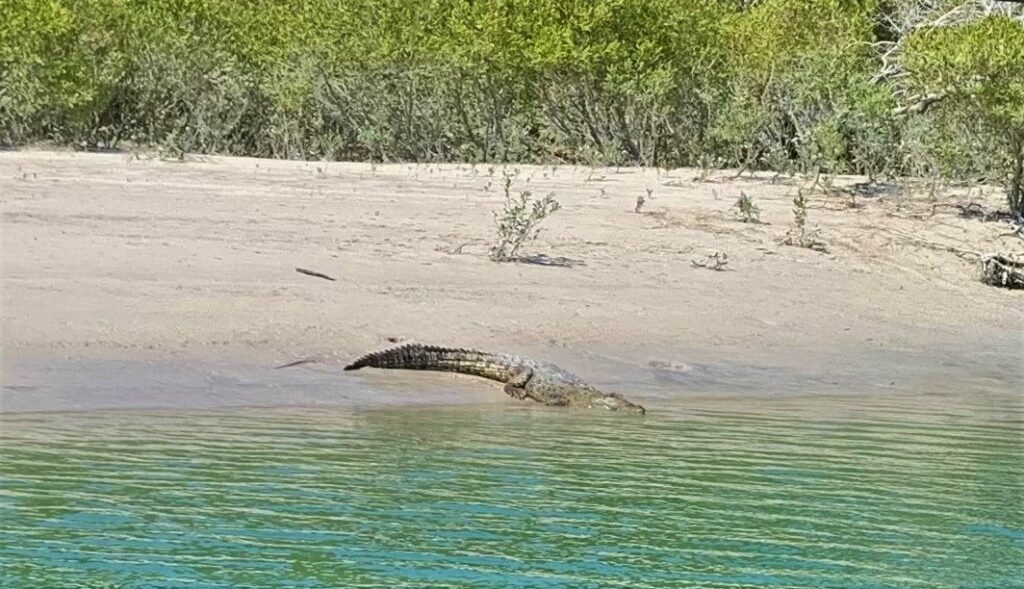 Basking in the winter sun

Actually, the Farm’s publicity says it best: “Willie Creek Pearls have been educating and inspiring thousands of visitors to uncover the history, mystery and story of the pearling industry. The complete pearl experience, from shell to showroom.”

A sneaky confession: in my opinion, wearing pearls is a fashion statement of Caribbean pirates and Ottoman sultans. Not for me. My wife loves them.

I reckon the real gem at Willie Creek is its location. Milky turquoise water and blinding white sand dunes.  This being the Kimberley coast there’s a “no toe in the water” warning because of that crocodile we see in the sun. His name is Nigel and he’s the very definition of languor and threat. For us, safe in the boat, on the Creek, he’s thrilling.

But in the end pearls, not crocs, are the reason we’re here. 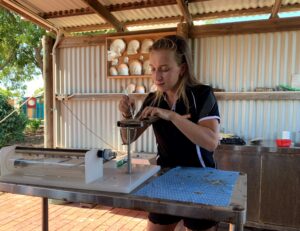 Early in the day, one of our group was able to select an unopened bivalve mollusc of the South Sea Pearl persuasion. Now, at tour’s end this is opened to reveal – what?  A small, mal-formed pearl that someone will probably love.

But of course, we should have been here last month! Because on that day the fingers probing the pearly flesh produced a pearlescent whopper estimated to be worth at least $150,000.