Ningaloo’s fringing reef is one of the longest in the world | credit: Australia’s Coral Coast

A recent milestone well worth celebrating was the tenth anniversary of the World Heritage listing of the spectacular Ningaloo Coast.

The 604,500 hectare, marine and terrestrial area near Exmouth is home to a diverse range of wildlife and one of the world’s longest near-shore reefs. This beautiful part of the world is much loved by Western Australians as well as being a huge drawcard for interstate and international tourists. 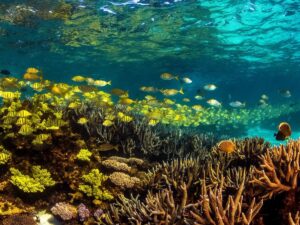 Ningaloo Reef is home to a myriad of marine life. Image: Scoop

The Ningaloo Reef is home to more than 500 species of fish and threatened marine life including whale sharks, manta rays, turtles and dugongs. Visitors to Ningaloo have an array of activities on offer, such as camping, snorkelling and hiking.

Under the WA Government’s Plan for Our Parks initiative, almost 50,000 hectares of new conservation and recreation reserve was created along the Ningaloo Coast in 2020.