Oldest evidence of the bilby discovered

Recent research has filled in some gaps in the documented history of one of Australia’s much loved but endangered marsupials, the bilby.

Western Australian Museum scientist Dr Kenny Travouillon has found that bilby fossils discovered in the 1980s and 90s are over 24.9 million years old. 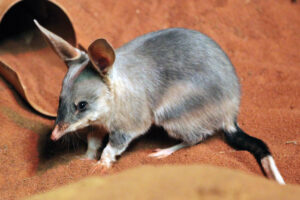 A national plan is being implemented to aid the recovery of the Bilby’s population numbers and distribution range. Image: Perth Zoo

These fossils, located in central Australia by U.S. palaeontologists, are now confirmed to be the oldest known evidence of bilbies from the bandicoot family tree, representing a new genus and species.  The previous recorded fossil find was 10 million years old.

The fossils have been named Bulbadon warburtonae after Dr Natalie Warburton from the Harry Butler Institute at Murdoch University in recognition of her ongoing research on marsupial anatomy and palaeontology. The generic name combines ‘bulba’ meaning ‘bulbous’, and ‘don’ meaning tooth, referring to the bulbous premolars.

Dr Warburton said: “It is only through understanding the history of how various groups and species of animals evolved that we can begin to understand the intricate nature of how ecosystems function and change through time.”

Dr Warburton was in the news earlier this year for her part in the discovery of an extinct kangaroo that was adapted to climb by grasping through powerful forelimbs and hindlimbs.